Zach is back... Not sure if he was really gone but I seemed to lost track of him. Zach was one of the first to send Kyle some Doc Good"ness" seen here

This time it was my turn..This card has been on my radar for awhile and while i did get it months ago , i now have time to show it.

He was also kind enough to send Kyle some cardboard. 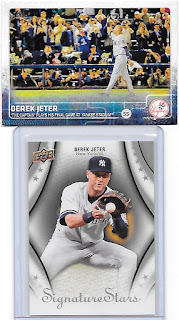 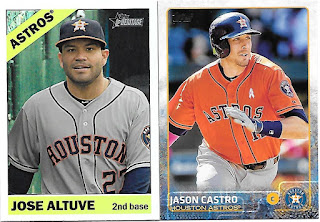 Thanks for the cards Zach and Glad I was able to get you yours after finally finding you..

Another Box from Everyones favorite Jedi

Jeff sent Kyle another flat rate box some time ago and as always , it was LOADED with goodies..

I will do my best to show some of our favorites.. 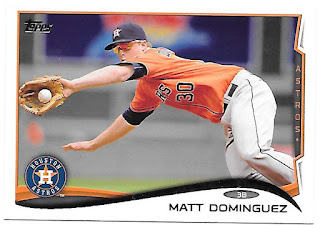 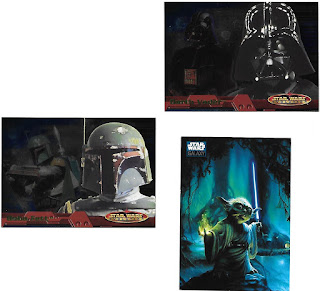 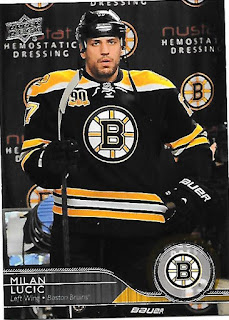 Astros ?? Yep ,
Kyle has seen the light and left the Yamkees at the alter.. No not that severe. He received an Astros hat for his birthday and it has soaked in that now he is a fan. Altuve and Springer are his boys now.

Thanks Jeff and apologies for the months long wait...

A call for cardboard

Masters of the Blogosphere , I am seeking donations for 2 kids who are into cards.What kind you ask , well let me give you some of the back story..
Owen ( 8 years old ) just wrapped up his Baseball season which my daughter was on his team and I was a coach. Through conversation , i have found the outfield is usually the spot for this , Owen told me how he goes to the same card show that kyle and I attend.He also spoke about his brother Liam ( 10 years old ) who collects.He mentioned his brother also is sick and that he likes most of all , opening cards with his brother.After speaking with his father , he told me Liam has Type 1 diabetes.I don't know much other than that but after running this idea by 2x3 Heroes JediJeff , it was a no brainer.I spoke to the father at the next game and explained what kind of blog world we have here and that I would ask you guys to do what you do best.He was on board and gave me the address for anyone who would like to send unwanted cards.
Owen , his favorite team is the Blue Jays , Hmmm $30 a week , his fav player is Jose Bautista.
Liam , Red Sox with Dustin Pedroia .

They are into basically any cards.Baseball , Football , Basketball and movie cards.

Thanks for any help with this , feel free to spread the word or if you have been given the address , give it to someone you trust.
Please email me at
cerne00atgmaildotcom
Thats 2 zeroes..

Timing is everything , and Jeff over at 2x3Heroes  is 2 for 2. My last post was the first example and now this.
We had a family dog , Bear , who half Newfoundland half Lab , was pretty much the happy go lucky sort.We have a 4-5 foot fence in the backyard which he would climb out on occasion and give me a reason to exercise and go looking for him.An all black dog at night was a good time but never the less, his health had declined the last 6 months to where he had seperation anxiety which called for 1 of us to sleep on the first floor to be with him.His hind legs were going and on the 2nd of this month , the strain on him was too much so that we put him down. The kids were obviously devistated that their Bear was no longer with us. Kyle spent much of the monday before with him.Laying with him and keeping him company.Thinking of good times i'm sure.
On that tuesday after we had him put down , I came home from the vet and saw that our mail had come.Yep , a package from Jeff. His packages always put a smile on our faces but that day his packages gave us some time to forget our sadness and have a moment of happiness. Since day 1 of interacting with Jeff , he has definately made the day(s) for my son and I cant thank him enough.
Hopefully he doesn't mind the text messages from Kyle ( yeah , from that phone ) asking about other cards he may or may not have.
I did manage to get some of the cards that were in the package 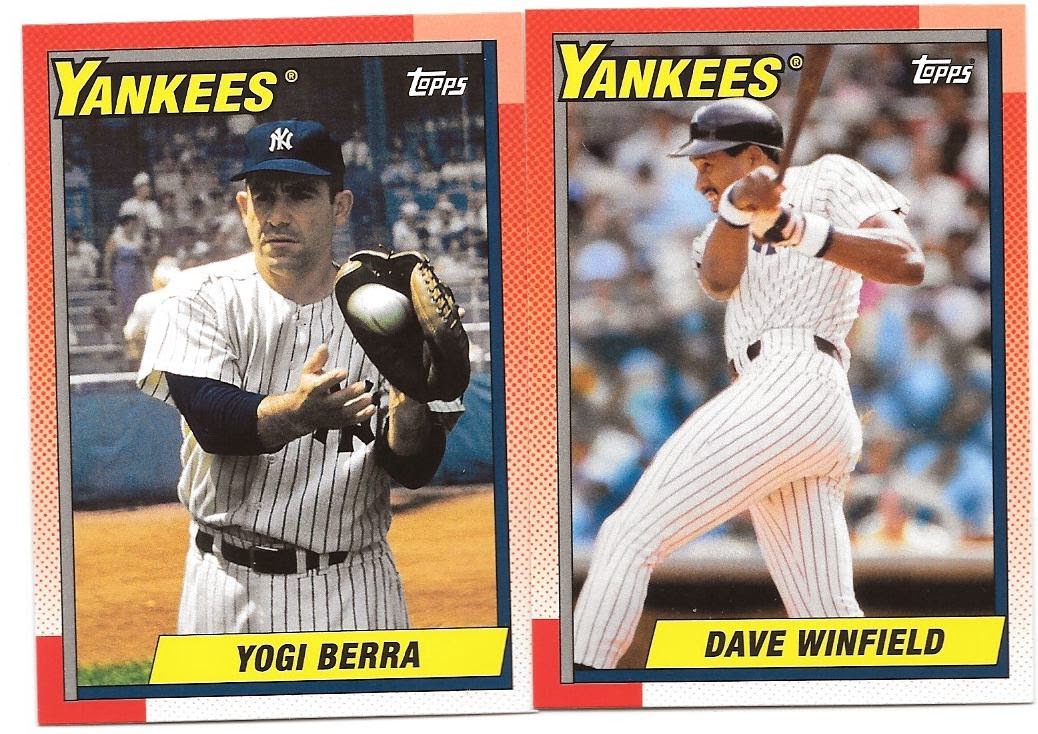 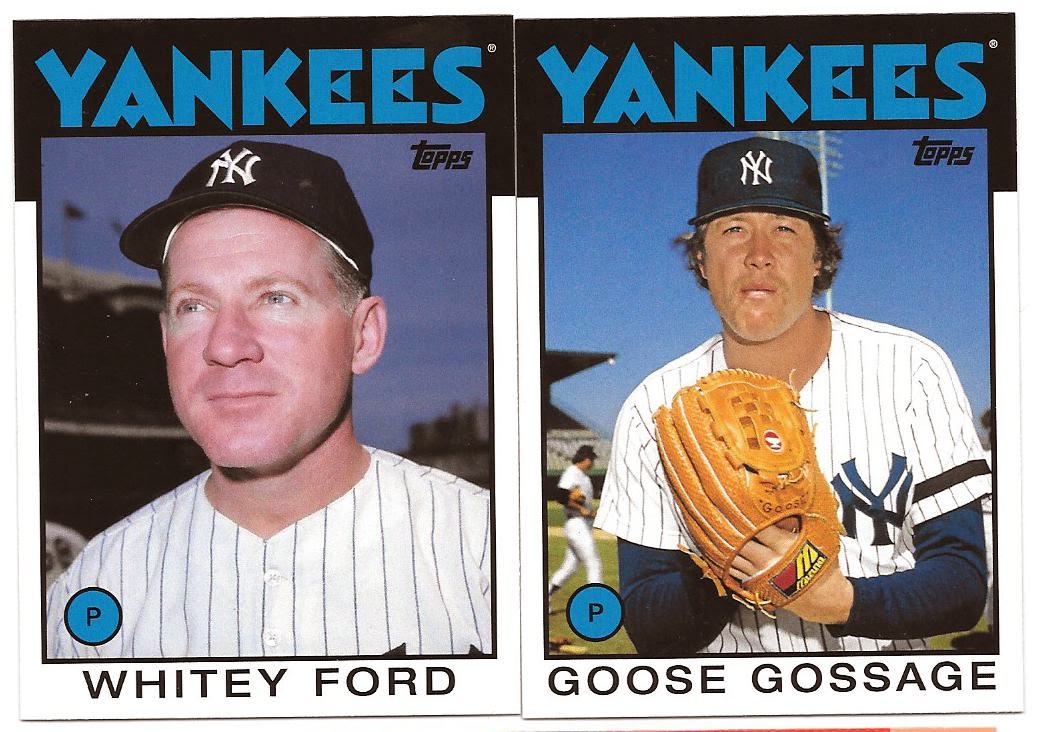 Can't go wrong with Yankee greats.. There were definately more in the package but due to his excitement and his switching of rooms , things were put away faster than I scanned.

Thanks again Jeff , I am working on a return for you..

Cards from a Jedi

Everyone's favorite Jedi (  Jeff@2x3Heroes ) dropped a PME (padded-manilla-envelope) onKyle and I and what perfect timing it was.This house has been nothing but baseball since April with Kyle and now his sister Chloe playing little league. Chloe was going to  play softball but since her age group would start out using Tee's to hit balls , she went the baseball route where the coaches would pitch.Both had a great season and Kyle is still playing with the District team and will take all-stars into august.Well until last Thursday. Kyle went to our local amusement park here in Rochester (NY) and the short of it is they had a pipe sticking out of the ground , not really protected and he stepped on it.The pipe took off the skin about a cm deep about the size of a half dollar.Xrays were good so its all about waiting for this scab to form and heal.He missed his game last night which is the districts which if you win you continue on until you reach the LL world series.We have yet to meet with the park , you see when this happened , he went to 3 different employees with a bleeding foot , and 2 told him to go here or there , the 3rd told him he wasnt allowed in that section with bare feet , mind you his foot was covered in blood by then.Anyways it did end well , but management wasn't to pleased at the handling of this incident with their employees.
Kyle hit the couch at home and I had a prescription in hand for just what the JEDI ordered.. 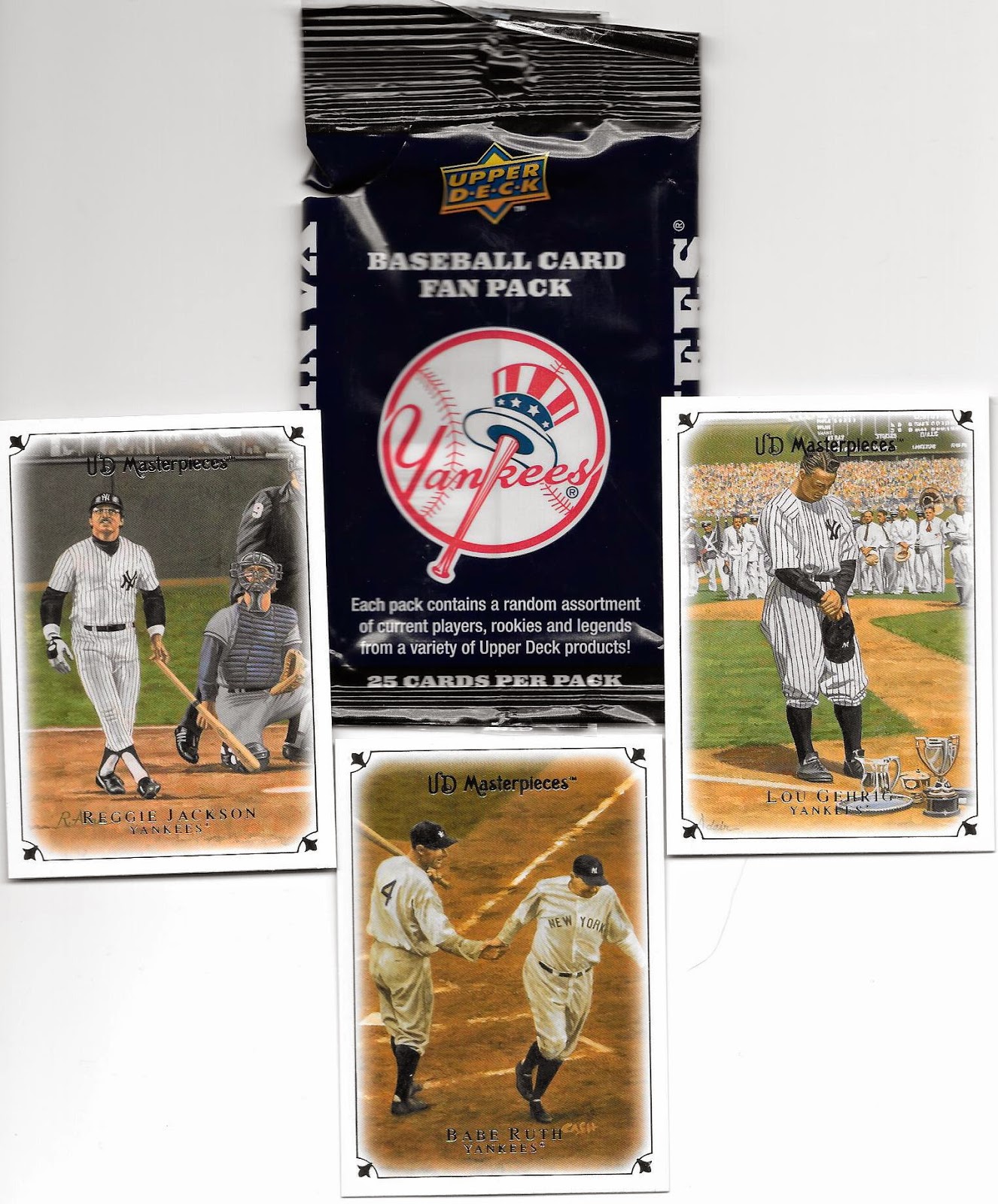 YANKEES !!! This was great pack , loaded with different years of Yankees.These are glossy reprints of UD masterpieces.As much as I like these , It really makes you appreciate the real deal masterpieces. 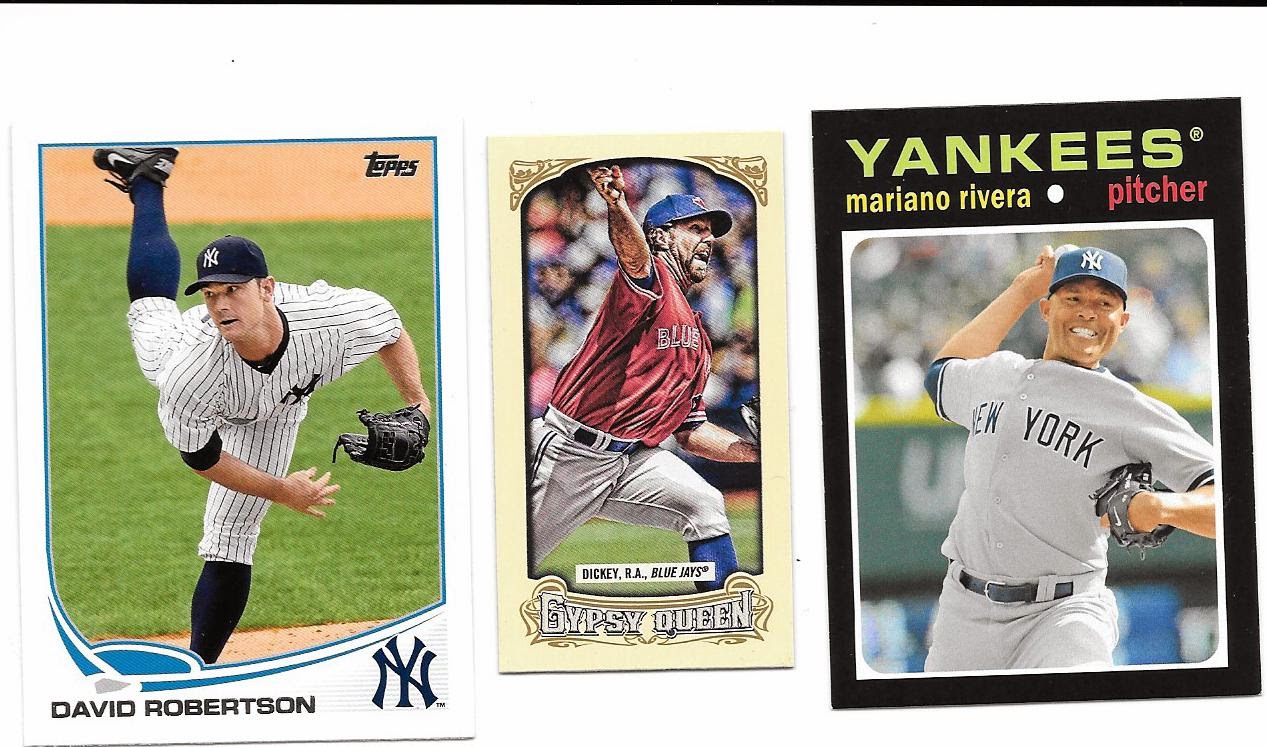 I sometimes wonder if Jeff is pulling his Mind Tricks because he is always sending great cards for Kyle. R.A. Dickey mini is just awesome and was the favorite of the bunch until this.. 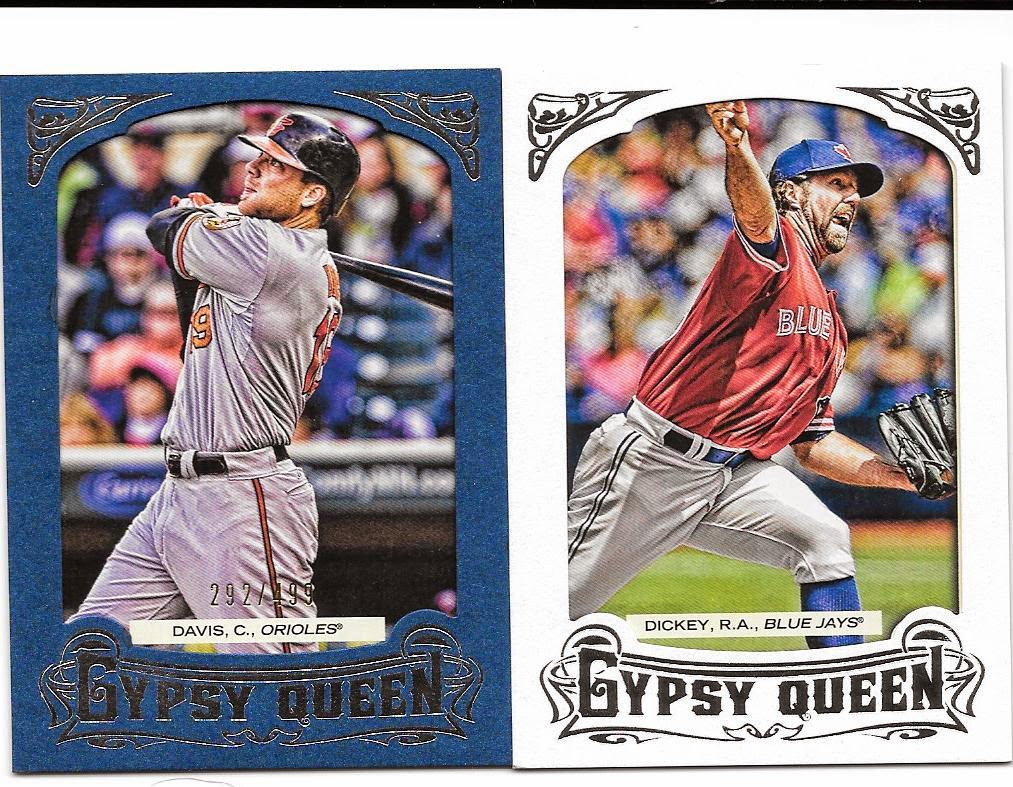 I can't thank you enough Jeff , you really hit the mark on timing and selection on this one.Kyle sends his Thanks as always..

(apologies for the awkward looking scans )

The cast of signers headed to Rochester 2014

This years cast of former players headed to Rochester. Fergie cancelled out in 2013 after what i heard was health issues but is on the list for 2014.I purchased a David Justice ball back in the early 90's off of QVC so he isn't a necessity. Straw , Jenkins and Blyleven are lock ins for sure..

As it turns out , a co-worker told me how he met Blyleven during the Hall of Fame festivities and asked him if he would ever come to Rochester.He told him that if he was ever asked , he would love to.Well my co-worker spoke with someone in the Red Wing Org. and made it happen.

Hurry , before you miss the Play at the plate

It seems the brainchild of Play at the plate is having a monster of a contest. He has reached 2000 posts and Topps was gracious enough to give him a box of Bowman to give away. you can read about it here.